I didn’t know my paternal grandmother.  She passed away in Maine when I was six years old.  To be quite honest, until recently, I believed she had died before I was born.  I didn’t know my maternal grandmother well, but I knew her.  Before she died, I was able to be with her on several occasions, some briefer than others, some more meaningful than others.  She lived in Hawaii.  And where did I live?  My family and I lived in land-locked Colorado, and I recall always having a sense of being alone, without the safety net of extended family.  Knowing what I know now, I tend to believe that that literal move was more than a just a little bit intentional on the part of my parents. But, in the grand scheme of things, it didn’t really matter. I don’t think that living without relatives nearby traumatized me.  It did, however, indelibly imprint upon me certain things, things my grandmother said or did or specifically taught me.  I felt a keen sense of urgency to remember them because without her constant presence, there would be no second chance.  The technology that exists today allows for instantaneous communication across thousands of miles.  My grandmother and I did not have that luxury.  Long distance telephone calls were expensive and out of the question in my home unless an emergency warranted it.  Hand-written letters took days or weeks to travel back and forth.  So, on the few occasions when my grandmother spoke directly to me, I listened.

A recent doll project brought all of this to mind.  A client asked me to create in 1:4 scale a Thanksgiving turkey, horn o’ plenty, and crocheted tablecloth.  Sculpted miniature turkey on a platter…check! 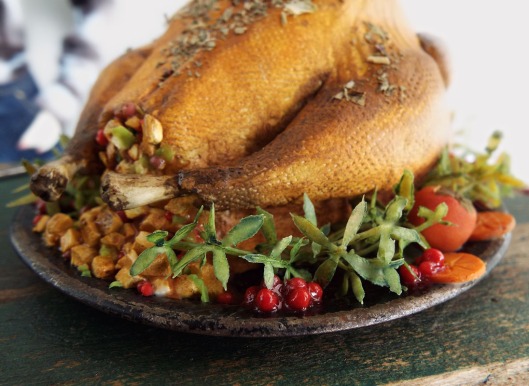 Miniature cornucopia with flowers and fruit…check! 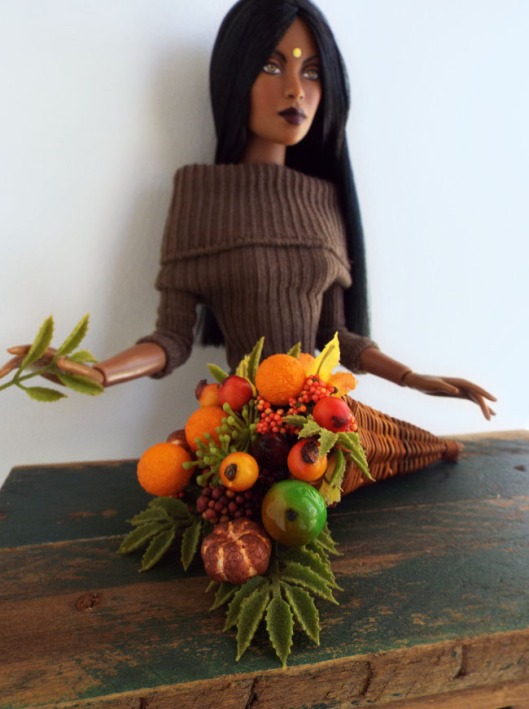 Crocheted tablecloth for a 9.5 inch Bespaq table…um…well, er…okaaaay.  I do love a challenge, and I have loved to crochet since I was very young.  It was one of the first skills my grandmother taught me.  I don’t actually remember a time when I didn’t crochet.  However, crocheting afghans or even miniature doll hats and such is a far cry from a 1:4 scale tablecloth that looks “right”.  As I have discussed before in The OSSome Blog, there is always “wiggle room” when creating items in the various doll scales.  If something “looks right”, it isn’t a big deal that it might actually be too big or too small according to the specific scale within which you are working.  Another point I have made before is that, while some fashion dolls are described as being a certain scale, the doll’s hands or feet might actually be in an entirely different scale, usually smaller.  All that to say that scale is less important than the end result.  Occasionally.  Digression now over.  Okay, so I knew I’d need to use a smaller thread than what I use for most hats, etc.  I settled on #20 in ecru.  I regularly make doll sized doilies for the OSS Etsy Store, so, in my head, I was thinking that this tablecloth was not going to be any more difficult.

It was, after all, just a bigger than usual doll doily, right?  Riiiiiiiiiight.  Maybe not.

Another little tidbit you should know about me is that, when it comes to doll sized crochet, I rarely use an existing pattern for the simple reason that patterns in proper scale rarely exist.  Oh, folks have been crocheting for dolls for centuries, I know.  But patterns in “proper scale” with small thread that might, if you were to hold your head at an angle and squint your eyes, might resemble doll-sized yarn or thread, do not exist in quantity.  Rather than waste time searching for a pattern that might exist, I usually make up my own.  What I had failed to take into account for this project is that I know how to crochet.  Say, what?  Yes, I know how to crochet, but I don’t really KNOW how to crochet.  My grandmother taught me the basics when I was a child.  I never forgot those basics, but once you move into the intermediate realm of crochet, things then take a side-step into mathematical formulas, etc.  Math is not my forte.  But, why is there math in crochet?  I mean, of course there is COUNTING in crochet work.  Just ask my husband who, on occasion, has interrupted me while I have been silently counting stitches while creating something doll sized.  If looks could kill…  Let’s just say that my husband has learned to observe me and what might be in my hands before speaking.  If I am holding a crochet hook, he judiciously remains silent until I’ve finished a round and looked up.  I had failed to take into account that, while I have crocheted hundreds of items over my lifetime, I have never actually crocheted a doily in human size.  I certainly have not crocheted an actual tablecloth.  We did OWN an antique crocheted tablecloth for a brief time one Christmas before our new puppy at the time decided to use the still wrapped tablecloth as a chew toy.  But, that’s a whole ‘nuther story.  And while a doll sized tablecloth would seem to be a crocheted piece of cake, let me assure you that it is not.  Well, not for ME at any rate.   I am sure there is some sort of formula for increasing stitches on each round to keep the finished piece flat rather than ruffled.  I do not possess that formula.  I did not want to waste time looking for said formula.  And so I did what I always do, I forged ahead and faked it.  For this particular project, I made up my pattern based on the first six rounds of a doll sized doily pattern called “Stacked Shells”. 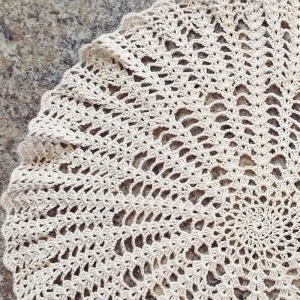 After those first few rounds, it fell upon me to invent rounds to carry the shell pattern throughout the piece while at the same time increasing the number of stitches per round to maintain shape and flatness.  No easy feat, and while I didn’t actually fail at it, I didn’t precisely succeed.  However, I knew that it would all work out fine as frog’s hair once I finished and was able to block the piece.  And it did.

My point in this blog entry is that, while the tablecloth project was an exercise in frustration that took many more hours than I had imagined, it was also a time when, with each and every stitch, I could reflect on the past and those moments with my grandmother.  Had she not taken the time to teach me and had I not taken the time to learn or had the desire to retain the knowledge and use it, that part of her would have faded into oblivion.  And that would be no small loss.  As a genealogy nut with lineage back to the Mayflower, I can attest to the importance of legacies.  One of my grandmother’s was that she taught a child of her heart how to crochet and to knit and to sew and to draft patterns and to keep on creating when creating causes frustration.  Forge ahead and fake it if necessary.  The results are worth it. 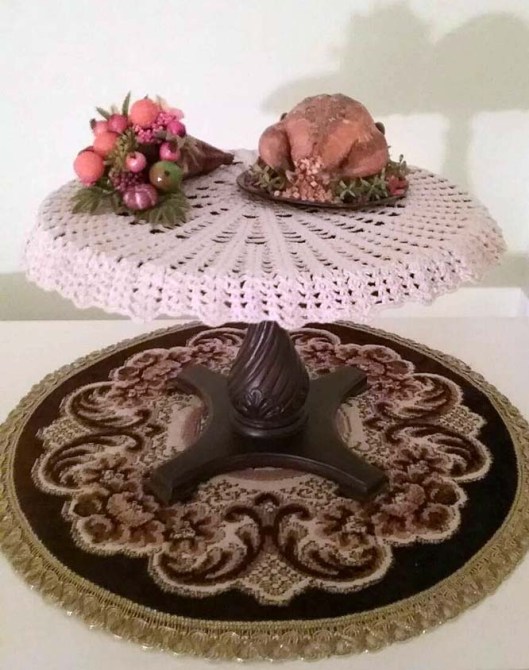 Customer Photo of Commissioned Thanksgiving Items by OSS (Her Bespaq table and rug.)

6 thoughts on “Giving Thanks”